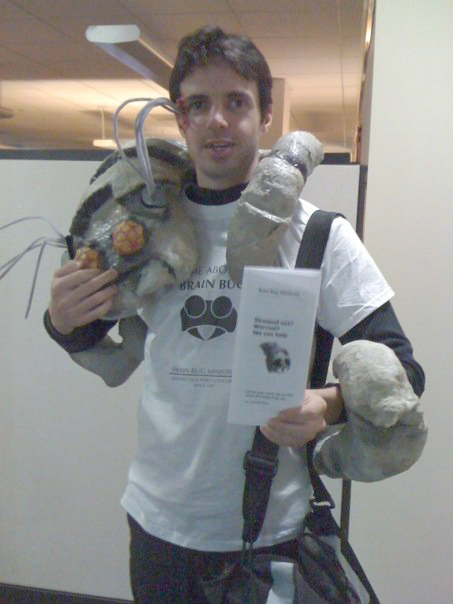 For the past month or so, I’ve been attending latex moldmaking classes at Machine Project, taught by Hunter Jackson, one of the founding members of GWAR. Over 6 classes, I transformed discarded couch cushions, with the help of adhesive chemicals, gauze, and latex, into this: 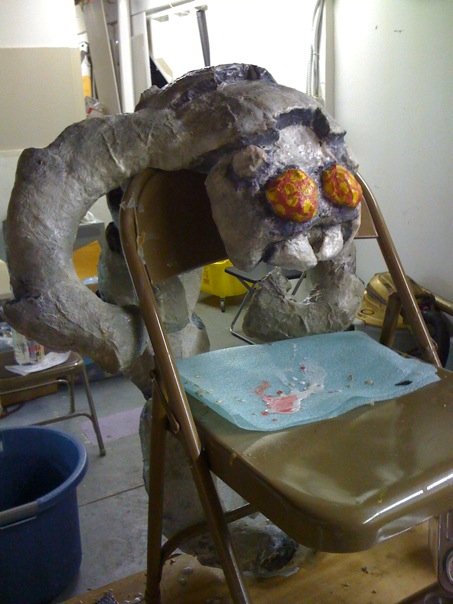 What, you may ask, is that? Well, that is Glaxnar. Glaxnar loves you, in spite of your massive inferiority to him, according to every measurable rubric.

The shtick to this costume was that the Brain Bug was only one part of it. It was the largest and most obvious part, but if you looked at my shirt, you would see: 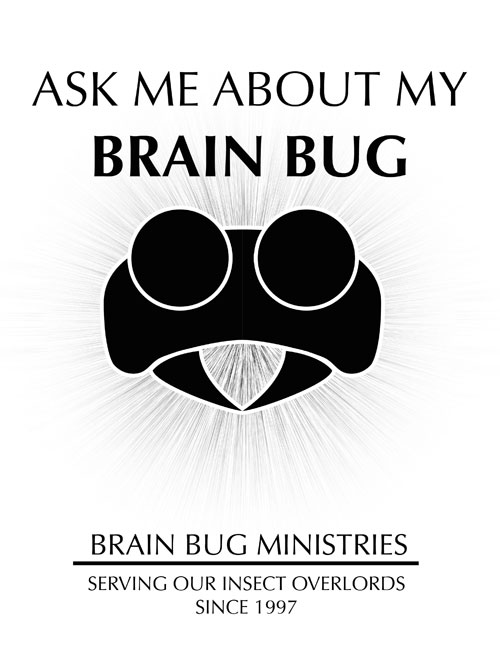 And as soon as I caught your eye, I would launch into a conversation with you, something like this:

Me: Hi! Have you heard the good news?

You: What good news?

Me: Why, about the Brain Bugs! They’re the only way to salvation.

Me: It’s true — all the bad parts of your brain, the parts that make you do bad things, that make you unhappy, the Brain Bugs will eat them away! A lifetime of bliss awaits you! Heaven on earth is possible, thanks to our celestial guides!

And at this point, I would hand over this pamphlet, and begin the hard sell, trying to get people to order a Brain Bug egg (only $499, plus shipping and handling from Alpha Centauri) and incubate it inside their own brains.

Seriously, read the pamphlet. It’s a hoot. It, not the bug, was the main part of the costume.

Now, this was a fairly original costume — despite not being entirely unique — and the execution, I feel, was the most unique and special thing about it. Bottom line, it was an original character, not one from a movie, TV show, or book. This is something I really try and shoot for. The number of zombie, vampire, pirate, and Where The Wild Things Are costumes this year depress me.

So when the DreamWorks costume contest judges got on the microphone and said they were looking for something “with a lot of effort put into it,” that was “original, and creative,” I thought I had a pretty good shot of getting one of the half a dozen prizes.

Now, this is a great costume, and he clearly put a lot of work into it. He deserved to win first place, despite his self-evident brown-nosing.

But second place? Also a DreamWorks character. Third place? A storebought Goth Lolita outfit, except (gasp!) being worn by a guy. Fourth, a knockoff of Aliens. Fifth, a witch that sang.

Sixth place was the costume I most respected from the entire contest — the guy, incidentally, works in my department: 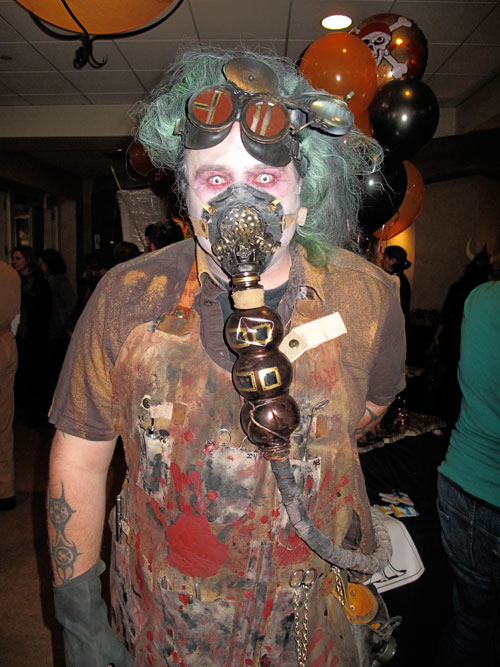 I know what I was getting myself in for when I chose the costume, and I am not in any way seriously perturbed by all of this. I just wish it was a little more ordinary for people to come up with something original, as opposed to copying something familiar and recognizable. Ah well — still happy with how it all turned out!